So You're a Senior, WTF!

Julie Sursok is an inspiring breakthrough author of the best-selling book “I’m Now called a Senior WTF.” Julie is a senior herself. She has run her own successful businesses, performed on stage and television and is an award-winning recording artist.

Julie emigrated from South Africa to Australia mastering the challenges of losing everything to rise back up again. And now with laughter, humility and life experience she is passionately inspiring seniors to stand tall and feel relevant again.

When she closed down her business, she realized that she was now in the category of “senior” but just didn’t feel like one. Julie saw seniors struggling with the premise that their self worth was tied up in their past and what they did and that they had now lost their identity.

It appeared retirement was fast becoming “retirement from life”. Julie knew she needed to change this and make seniors realize that this is the beginning of so many new things. She needed to get up on stage and talk in front of thousands of people and help them find their purpose and to be curious about interests that they hadn't dared to try. And, through that they would feel alive again.

So, as an example, she wrote a short film and directed it, executive produced a movie, became computer literate, danced the salsa with her grandchildren, discovered new countries with her co-senior and now, she's written a book.

Julie tells us, "For Boomers, it is only one small step at a time, you don't climb to the top of the ladder in one leap, you climb up one step at a time. I say to Boomers, we are all in the same boat but now is the time to find your new why. It just takes curiosity." 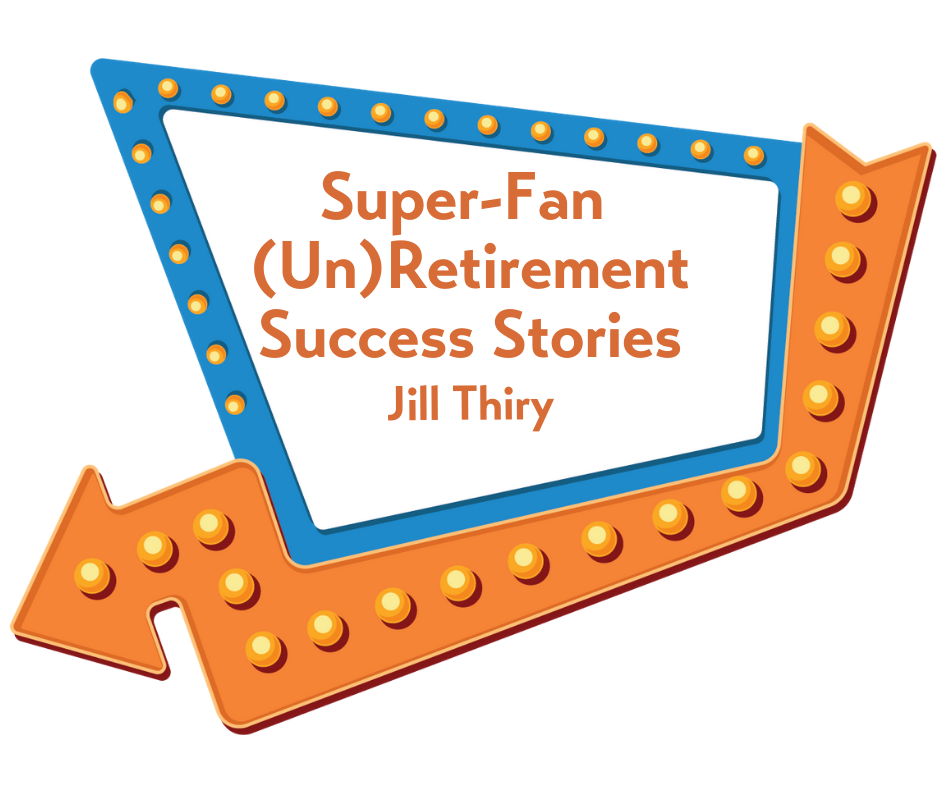 Jill Thiry tells us she "fell upon" publishing just after completing an MBA in San Francisco. She also attended USF evenings while working full time in Insurance, after 2 years of teaching skiing, kayaking in Europe and traveling the world en route to home.)

She started with CMP Media in Oakland at their partnered investment with HealthWeek magazine doing classified ad sales and management. That initiated a 15-year career at CMP that grew professionally to VP Group Publisher.  She then decided to leave publishing for something new. “My advice is to look for new Yes’s in life, which also means practicing new desired No’s.”

Jill joined a choir, and then started a regular yoga and Pilates practice. She took her "work hard, play hard" philosophy and applied it more to "work smart and take time off to enjoy new things".  She joined an annual Family Goal Setting Group, which was the start of Club Change.

Jill also wanted to now only work for things she was passionate about, and for many months even worked straight commission in order to toe-dip in healthcare, human resources, small business development, and recreation. During this same time, she started visiting Rancho La Puerta more and more and soon it became her  "happy place". She had an opportunity to move to Mexico and work at the Ranch—and she took it.

Three years ago, Jill reduced her hours at the Ranch and now co-exists across the border as well.  Half of each week she’s in Tecate working in her happy place at Rancho La Puerta. The other half of the week she’s enjoying the SoCal beach life in Imperial Beach and growing her Club Change business.  Jill remains inspired and ready to expand. “Who knows, maybe the next act will include "Club Change" weekends all over the country, and hopefully complete my first book?!”

Jill's advice on (un)retirement: “So often what we are looking for is right in front of us, and when we are humble and honest and looking with an open mind and heart, the solution is right there, like a red carpet extended for the rest of your life!”

Note: Jill now offers a "Set Your Intention" one-hour complementary class, or an 8-week Club Change session for assistance in making change, one loving intention at a time. 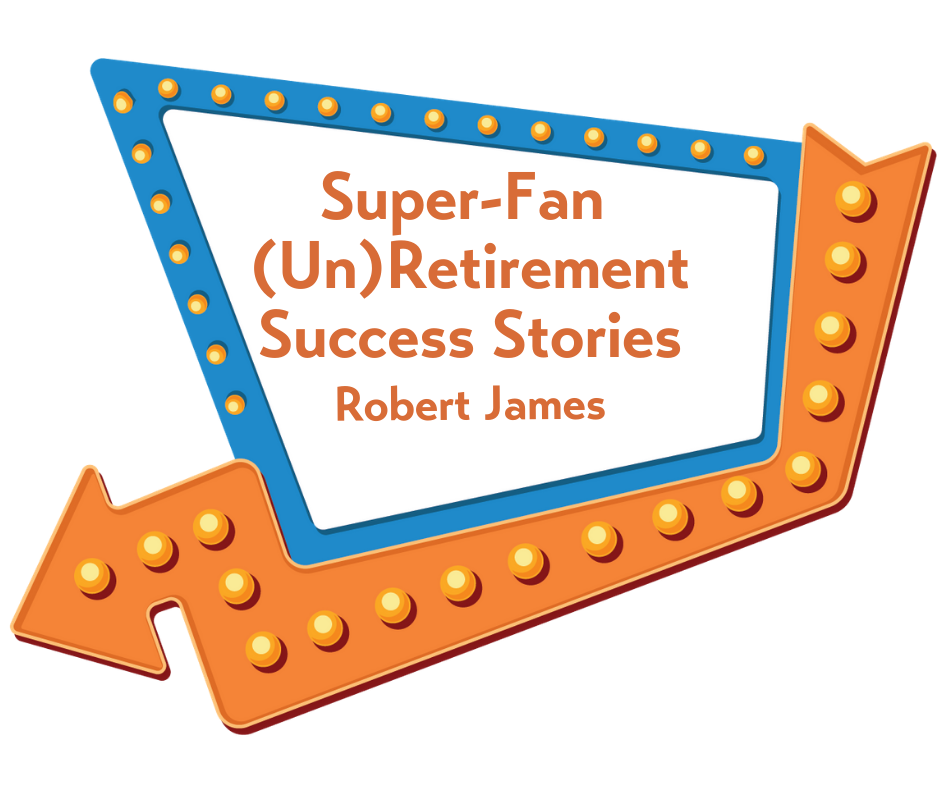 Based in our nation’s capital, Bob James enjoyed a 40-year career in marketing and PR. His clients included tech companies, manufacturers, financial services firms, publishers, trade associations, and government agencies. Besides steering clients’ campaigns, Bob spent much of the 40 years’ time writing copy, contributing articles and op-eds to trade magazines and to big-city newspapers like Newsday and The Washington Post. He even ghost-wrote speeches for a U.S. President (hint: the one who starred opposite a chimp in the 1951 film “Bedtime for Bonzo”).

Bob climbed off the marketing merry-go-round the day he turned 65, devoting the next 18 months to the hunt for a second career. “I’d been working 40 hours a week since I was 19, and was happy to step out of the rat race,” Bob told us.

“That said, I felt unmoored after I dropped out. While I told myself that was okay—I was taking a ‘gap year’—still I’d spend my mornings obsessively watching podcasts and reading books and blogs about retirement lifestyles and ‘encore careers,’ making lists of possible second-act careers.

“But none of the business pursuits I landed on felt quite right—or, indeed, sustainable. I tried a part-time job, but hated it and quit after three days (the red uniform required didn’t help my morale). At one point, I even started to draft business plans—one for a trade publishing company, one for a tour operator, and the third for a recycling firm. But all those ventures seemed formidable, exhausting, and way too risky. The research I did only persuaded me that the businesses were personal dead ends.

“Meanwhile, I filled my afternoons drawing and painting and studying with great teachers at two of the local arts centers. Those pursuits soon became the highlights of my week, second only to joining my wife on Fridays for Happy Hour at the pub down the block.

“Then, suddenly, one day in class I dashed off a painting the teacher (not kiddingly) called a ‘masterpiece,’ and I realized that—with enough effort—I could move beyond ‘hobby painter’ to ‘professional painter’ status.

"Strange as it sounds, Covid-19 pushed me to act on that thought. Locked down and unable to venture outside much, I instead hired an artist’s consultant. With her guidance, I built a website, launched a blog, commissioned a logo, printed business cards, joined local arts organizations, and applied for exhibitions and fairs. The new business was up and running in less than four months, at a cost of less than $5,000.

“The best way to prepare for your second-act career is to pursue a passion project—or two or three—without any thought of monetizing them. Then, one day, things will click, and you’ll be off to the races!"

Bob now paints small expressionist still lifes in oil. He spends his days on the lookout for objects that evoke tranquility and domesticity, and paints them in a realistic fashion. By applauding the plain and prosaic, Bob’s paintings ask viewers to slow down, step back, stop doing and start looking—if only for a moment.

For more information about Robert Francis James go to: robertfrancisjames.com/ 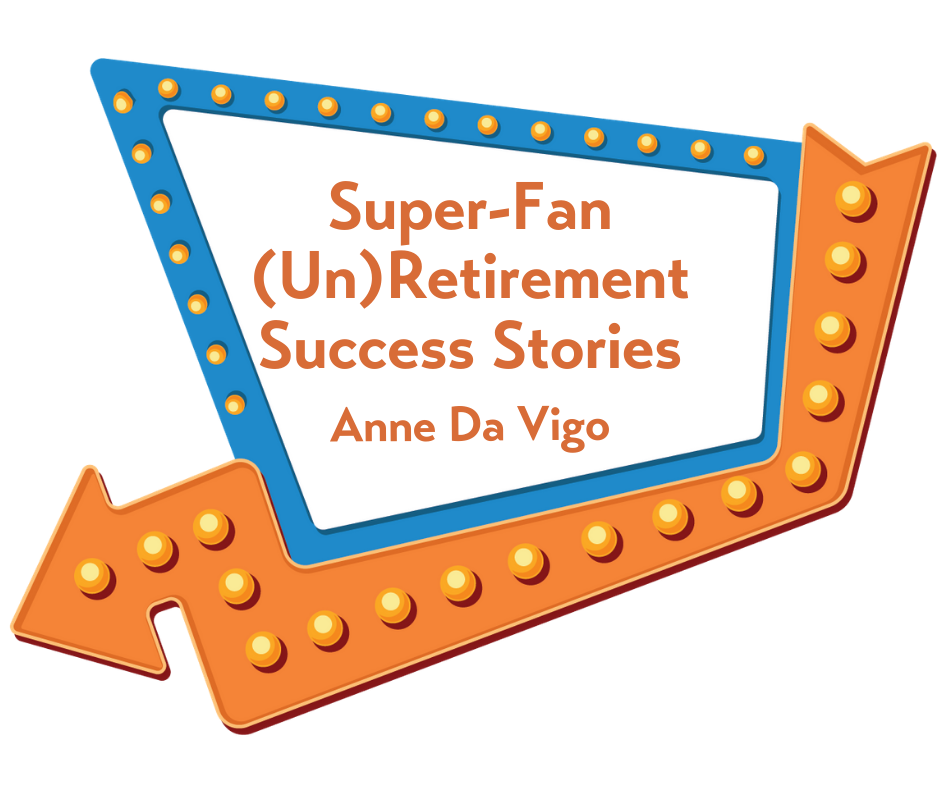 Anne Da Vigo's career spanned 30 years as a crime beat reporter at newspapers throughout California and as public information specialist in California government. During her news career, she was nearly sent to jail for refusing to reveal her sources. She covered the trial in the first of the Lords of Bakersfield cases, a California murder series that spanned decades.

When she's not researching and writing a new mystery, she's visiting book clubs to chat about her novels. In her spare time, she takes tap dance classes, where she became proficient enough to dance with a performance tap group. If you are thinking of writing, some advice from Anne: "I believe that everyone has a story; they just need to pick up a pen and get started. It's never been a better time to write your story, when 60 percent of all books are self-published."